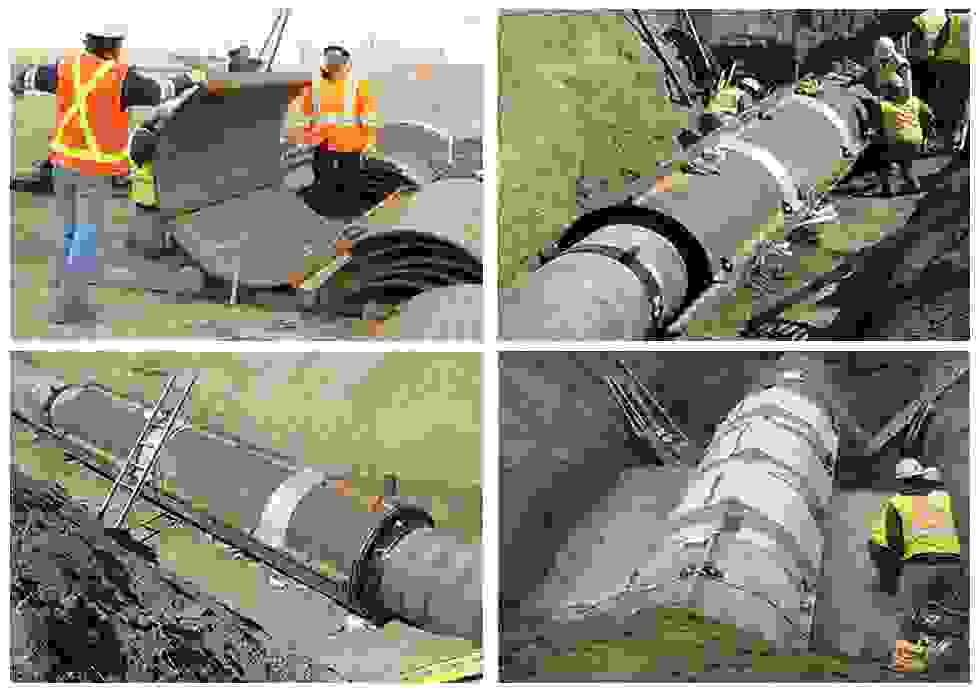 THE MOSAIC COMPANY operates the world’s largest solution mine in Belle Plaine, Saskatchewan, producing potash is used mainly in fertilizer. New rail service to the plant required several existing buried water mains to be exposed and encased in steel to protect them from the new loads presented overhead - with all installation performed without loss of service. Stainless steel spacers were used to center, restrain, and isolate the carrier and casing pipes.  Ironhed’s Flanged Maintenance Pipe (FMP) was then installed and closed by bolting the continuous flanges every 12 inches. The result is a strong and unitized casing throughout the length of the run. These casing also received vents and gaskets (which act as a barrier to intrusion). Installers report project completed on time.  Prior to backfill, cellular concrete was poured to the springline of the casing pipe to stabilize the configuration and minimize settling.

NOTE:  Due to availability of larger machinery we have standardized on two piece casing as opposed to the four piece which was used on this earlier project.  Much easier to assemble. 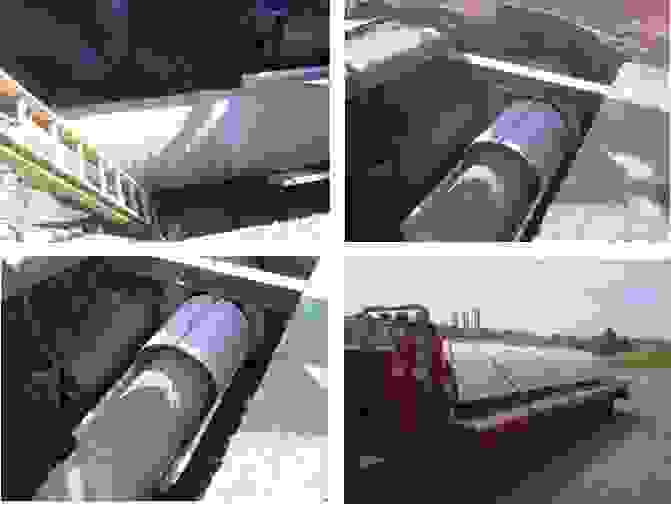 This customer needed casing for protection of a 30" water main. They ordered 54" I.D. x 1/2" wall FLANGED MAINTENANCE PIPE which was sandblasted, then coated with Tnemec Hi-Build Epoxoline II in the factory. Lifting slots with shackles were provided to make handling, final placement and installation in the field as simple as possible. Once installed the new carrier/casing was to be further protected by a precast arch positioned over a cluster of existing utilities.     . . . Back To Index

NOTE:  Due to availability of larger machinery we have standardized on two piece casing as opposed to the four piece which was used on this earlier project.  Much easier to assemble.

This contractor recently sourced Flanged Maintenance Pipe for split casing which was required by Stafford County to provide mechanical protection for an existing PVC sewer pipe.  This pipe was installed under planned road construction to connect a nursing home with a medical arts building in Fredericksburg.  The company's owner said that he usually would buy steel pipe and couplers, saw them into halves and weld fastening tabs onto each.  He then became aware of Ironhed's FMP product and was sold on its potential to save his crew time and his company money.  First, the FMP product was dropped at the job site - ready for install (saving him the time and expense to unload bulk pipe at his shop, cut and fabricate the pipe and couplers, and then re-load and transport it to the job site).  Secondly, Ironhed welded lifting eyes onto the corners of the FMP making its hoisting, placement, and adjustment as efficient and safe as possible.  Lastly, FMP bolted together quickly with a wrench and cordless drill requiring no couplers for the straight run.  The workers were concerned that the holes would line up correctly (no doubt a problem with cut & welded steel) and seemed impressed when FMP’s did every time - due to the fact that FMP is an engineered system, manufactured to close tolerances - specifically for this purpose.   . . . Back To Index 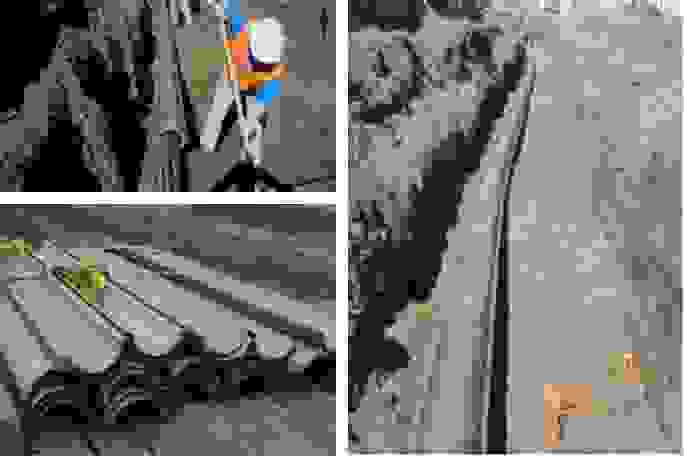 This contractor does a lot of utility relocation work.  They were called out on a job in Nebraska last March to move some underground communications cabling.  A Nebraska Department of Roads project required that they move and lower 1700 ft of telecommunications cable..  The plan was to expose, move the innerducts, and drop them from four feet to eight feet deep.  In one section where they were building a new bridge viaduct, there was going to be forty feet of surcharge put on top of the cable.  To insure protection and future access through this section, the plans called for 260 feet of 8 inch split steel casing terminated into hand holes at either end.

Every now and then a contractor gets hold of a job where everything works well and this turned out to be one of them. Even though the communications provider was requiring the contractor to use a pipe product they had never used before, that was the very thing that cut about a day of labor off the project.  According to the company’s project manager, “the fiber was laying at 4 feet, so we potholed it and we dug right alongside of it down to 8 foot and then dropped into our ditch down 4 feet”, all without any harm to the cable.

For cable relocation projects, this contractor  typically used steel pipe that was cut in half either with a band saw or a plasma cutter and joined with hinges, slotted tabs and fasteners.  He commented, “the hinged 4 inch is the only thing we’ve ever done and if you had to do hinged 8 inch, it would have been a manhandler.”  The communications provider was specifying a new type of split steel they wanted to have field trialed on this project.  The split steel being called for wasn’t split at all.  It was formed into what looked like a half of a piece of galvanized steel pipe with 1 inch flanges on either side.  The flanges were perforated with slotted holes every 3 inches.  He commented that it reminded him of the riser guard you see being used on utility poles but with a much heavier wall thickness.

Unlike the hinged split steel, the workers would only have to handle half the amount of weight during the installation process.  Due to the fact it was a straight stretch they would be able to start with a 10 foot piece on the bottom and a 5 foot piece on top and stagger the joints the entire length.  This would eliminate the need for any couplings and the assembled casing would be extremely strong.  Another nice feature was that the inside diameter of the assembled pipe precisely matches the outside diameter of IPS sized conduit.  With the extra space, they were able to fit all ten 1¼ innerducts into the casing.

According to the project manager, when they initially bid the job they figured about a day and a half of labor to put in 8” hinged steel.  “We were done a heck of a lot quicker than I thought we would be.”  The crew used cordless drills and installed the included stainless steel fasteners.  “We zipped it together really fast.  Two hundred and sixty feet took us three hours.” So with the new flanged duct they were able to place the pipe in about one fourth of the time.  With regard to the rest of the job, everything went really well.    . . . Back To Index 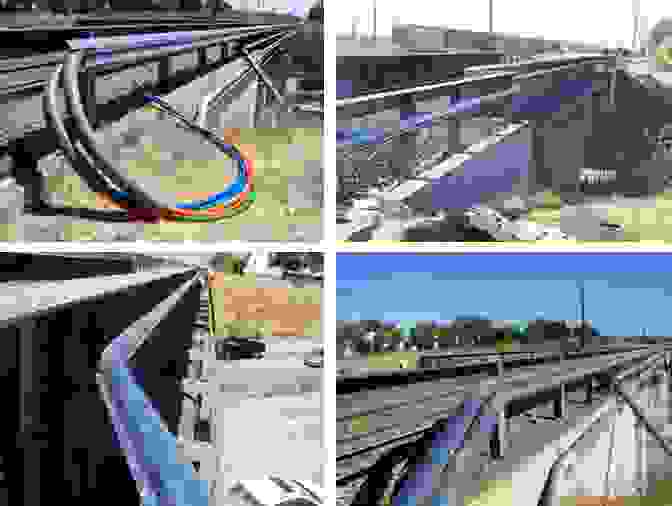 What do you do when the bridge or structure you are attaching your utilities to will be removed or rebuilt in the near future?  That was the question asked by Verizon Business in the Bay area recently.

Bridge Masters, Inc. of Bend, OR came up with the solution using split duct by Ironhed.

Al Herauf of Bridge Masters, Inc. stated, "Our crew attached the 5" Ironhed split duct to the bridges.  We then placed a 4" Liquidtite conduit inside and then pulled HDPE inner duct into the Liquidtite to be direct buried underground without disrupting fiber service."

The project went smoothly as the Ironhed split duct was very easy to install.  Herauf stated, "We have installed split duct on quite a few Railroad bridges over the years.  It allows for easy access for inspection and maintenance due to the excessive amount of movement inherent in a Railroad bridge application." 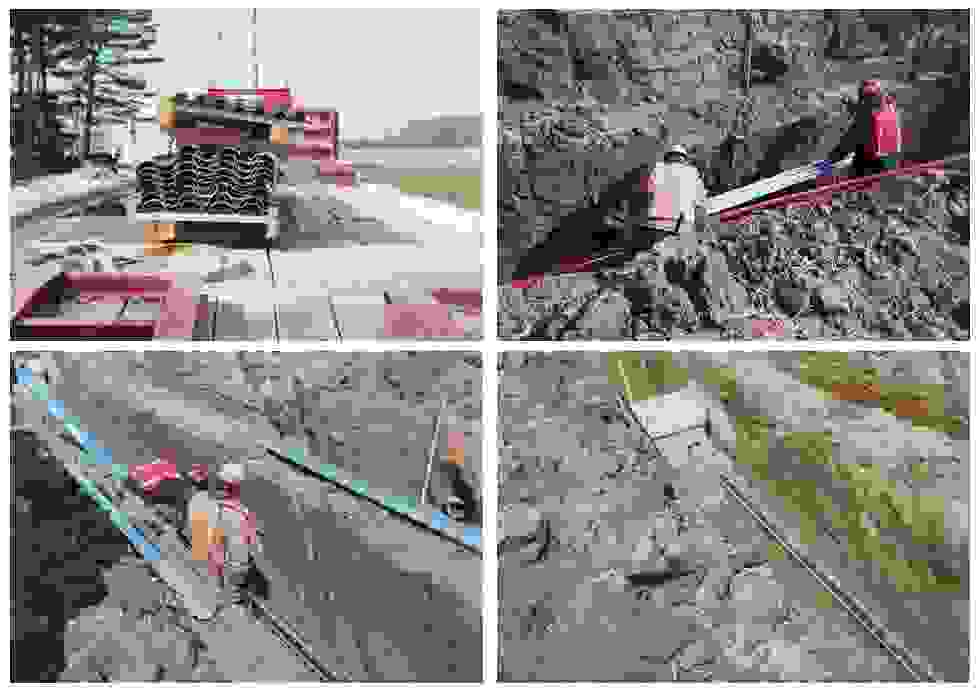 My name is John Wedemeyer and the company I work for, Midwest Underground, does maintenance and repair work for AT&T and MCI.  When roads are widened and buried cable has to be uncovered and moved, and we are sometimes required to place a split steel encasement around the cabling for added protection before covering it up again.

The last thing you need down there is a product that is hard to install!  The split steel casing we were using consisted of a five or ten foot length of pipe that had been split into two halves.  Hinges were welded on to join the halves together.  Due to warping (probably caused by the heat to weld on the hinges and tabs) a lot of the times the hinges wouldn’t go back together and you had to beat the bolts in and then you had to put the couplings on it.  Another problem with lengthwise cut steel beyond being warped out of shape is sharp, jagged edges that the guys can get cut up on while wrestling with it down in the trench.

We then began to work with Ironhed LLC, about the difficulties of working with split steel casing.  Working conditions aren’t always favorable down in the ditch; most of the time you have mud and water and everything else to contend with.  Through a series of meetings, conversations and Ironhed people spending time with us out in the field to get an understanding of the environment, we worked together to come up with a better design.  Ironhed was able to take our frustration with what we had and our ideas for what might work better, along with their own skills and connections and solved the problem.  The Flanged Maintenance Pipe, FMP in my estimation is a far superior product to anything else available. We have used it on many projects over the past three and one half years and it performs perfectly for what we need it for.